skip to main | skip to sidebar

We had such a great time this past Friday night. Our friends Allen and Kelli hosted Allen's 30th birthday party at Frankie's Fun Park. I had forgotten how much fun that place can be! Even though it was too cold and rainy to go outside, we still had a blast eating the Frankie's food, having birthday cake, and playing in the arcade. The highlight of our night was playing the Deal or No Deal game for tickets! The birthday boy was the big winner of the night and got 200 tickets. Jason and I got 104 or something like that ... we took the deal! I could never play that game with real money! I was freaking out over just tickets! Unfortunately, I didn't take my camera, so there are no fun or incriminating pictures from the night!

Here are a few other pictures I thought were cute. The first one is Camryn dressed up for church in her USC dress Aunt Alison bought her for Christmas. She is all Carolinaed-out, down to the bows in her hair, although you can't see them. A poor, misguided Clemson fan at church told us he was going to take pictures and turn us in to DSS for dressing her like that. I told him if that was the case, DSS would probably call to beg us to foster some children since we are one of the few families in the upstate who don't mistreat our child by dressing her in orange!

The other picture is my favorite from Camryn's party. My brother-in-law got the perfect picture of Camryn and her best friend Alyssa. I can't tell you how many times Kelli and I have tried to get the perfect shot of the two of them, and Justin didn't even have to try! They just saw him taking a picture and cheesed it up for him! These are the sweetest little girls in the world! 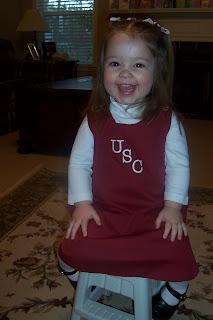 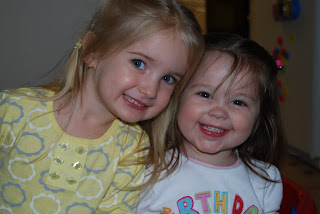 Family & Friends Who are Blogging

The Burleys
Welcome to The Burley Family! Jason is a minister of music, Heather is a school psychologist, and we have the most precious girls, Camryn and Ella, who we absolutely adore! We love our life and our little family of four!