skip to main | skip to sidebar

I started planning Camryn's birthday party in December. By the time we went home for Christmas, I already had my cake picked out and visited the lady who made Camryn's cake last year to ask her to make the one for this year. It was a three tiered cake (just what every 2 year old needs, right? Yes, sometimes I go overboard!) that was red and white with stripes and polka dots. I even bought little Sesame Street figurines to place on the cake to go along with our theme.

Camryn's party was on a Saturday. My mom picked the cake up on Thursday evening and traveled with the cake to Charlotte on Friday morning to meet my sister and brother-in-law so they could all ride together to my house. Around 4:00 pm on Friday - LESS than 24 hours before the party - mom calls and says, "I have bad news about your cake." She went on to tell me the entire bottom tier had collapsed, causing the top two tiers to fall into it and over into the cake box. The bottom was basically demolished, and the decoration on the second tier was ruined. The top layer was fine but would only feed a handful of people. I was just totally in shock and didn't even know what to do. After feeling completely helpless for a few minutes, I went to a local bakery to see if they could help me at all and recreate any part of the cake. No luck on such sort notice. I came back home and just sat on the couch in a daze. Finally, Jason gave me a little dose of tough love and firmly told me to get my rear end off the couch and go to Publix.
Long story short, the incredibly nice girl at Publix told me at 6:00 pm, after I told her the story of my ruined cake with huge tears in my eyes, that they could make a cake for me in time for the party the next day. I was at my breaking point by that time, so she must have thought I was a major nutcase, but the Publix bakery people were my heroes for the weekend and saved the party. Plus, they made a cake that I thought was just precious! 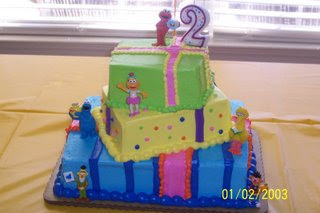 WEll I think it looked AWESOME!!! ANd way better than what you showed me was left of the original plan---Isn't that just like GOD with us??? Sometimes the unexpected turns out to be what is always BEST!!!
** and a little encouragment from friends helps...although I was not really sure of what to say to you in your mini breakdown

I love all the colors on this cake!! I was amazed. Who knew Publix was so speedy and great!!
BAC--you are so right!!

Family & Friends Who are Blogging

The Burleys
Welcome to The Burley Family! Jason is a minister of music, Heather is a school psychologist, and we have the most precious girls, Camryn and Ella, who we absolutely adore! We love our life and our little family of four!